Many clients, supported by their Lactanet advisors, had the opportunity to discover the benefits of the PROFILab report during the free trial period in 2020. Read on to learn how this innovative tool has proven valuable for two producers equipped with robotic milking systems.

The PROFILab report shows the profile of the different milk fatty acids contained in the samples used to calculate milk payments to producers. The report is generally made available within four days of milk collection. The fatty acid profile is an indicator of rumen health in the herd. It also is also useful for monitoring the effects of changes made to the ration or to herd management and contributes to achieving better feed margins.

The selection of grain served in the robot: a change alters the profile

Serge Fortin is an advisor with a keen interest in feeding and a strong advocate of forage milk. His client, Ferme Auny, in La Doré, in the beautiful Saguenay – Lac-Saint-Jean region, uses a robotic milking system to produce organic milk. 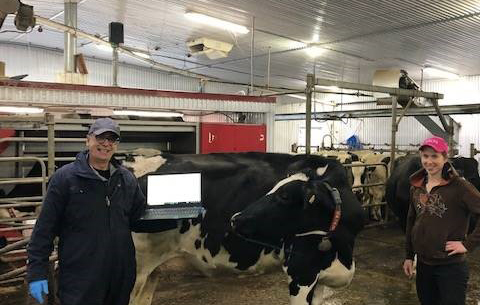 From left to right: Serge Fortin with his client, Audrey Bilodeau from Ferme Auny.

The new forage diet fed to the cows since September didn’t seem to be optimizing fat production in the herd. The PROFILab report revealed that the herd’s de novo fatty acid levels were below the provincial average.

To improve the situation, Serge suggested increasing the amount of grain fed in the robot (peas and barley) by an average of 4.5 kg/cow/day. The producer was reluctant to implement that recommendation, however, as she was concerned about increasing the cost of the ration. Serge then proposed revising the grain menu in the robot to increase the quantities fed to higher producing cows and reduce those fed to less productive cows, without changing the overall quantity fed to the herd each day. This strategy, which reduced the grain ration fed to the less productive cows to 1 kg/day, had no significant impact on the frequency of their visits to the robot.

The producer reprogrammed the robot on October 29… and it didn’t take long to see a change in the de novo fatty acid and fat levels:

Thanks to Serge’s advice and PROFILab report, Ferme Auny has continued to improve its feed margin to an enviable level:

“My milking robot generates a lot of data, but PROFILab and my Lactanet advisor provide me with the tools and recommendations that make a real difference on the feed margin.” –  Audrey Bilodeau

Tighten the rollers to the max!

Mélissa Grandmont, an advisor with Lactanet for the past 20 years, is pleased to count Ferme CENTVIN among her advisory service clients. This dairy farm in Saint-Léonard-d’Aston, in central Quebec, milks a herd of 55 cows with a robotic milking system. 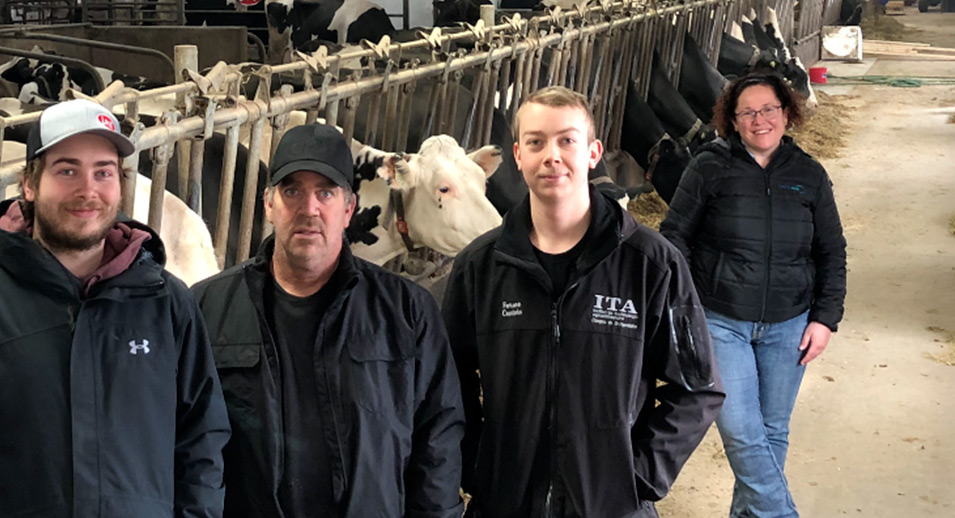 From left to right: Maxime, Claude and Michael Vincent from Ferme CentVin. In the background, Mélissa Grandmont, Lactanet advisor.

Over the fall, the corn content of the ration varied based on on-farm availability: the dry corn fed since the end of September was replaced with high-moisture corn harvested at a lower moisture content than usual, due to the whims of Mother Nature in November. Before being fed to the cows, the high-moisture corn is put through the grain roller… Using the tools at her disposal, which include PROFILab, Mélissa noted that the starch in the corn was not fully available to the cows, a hypothesis confirmed with a sieve analysis.

Mélissa thus advised her client to tighten the rollers as much as possible, a recommendation that Claude, the farm’s owner, quickly implemented on November 24, 2020.

The impacts of this change

The graph below is taken from the November PROFILab report for the herd. The vertical blue line indicates the date on which the rollers were tightened. Although the change did cause a slight reduction in preformed fatty acids (dark green line), the de novo fatty acids remained stable (dark red line). The profile indicates that the more finely milled grain has not affected rumen health. Hence, increasing the available energy in the ration improved milk production.

The change in the ration increased milk production by 2 kg per cow, without affecting fat content. The result is an $85/day increase in the net value of the milk produced by the 55 milking cows in the herd.

“My Lactanet advisor and my PROFILab report are the perfect complements to my robot data.” – Claude Vincent 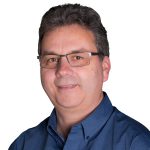 By Mario Séguin, agr.
Mario is committed to improving dairy herds. A graduate in Animal Science from McGill University and a member of L'Ordre des agronomes du Québec, he contributes to the development and enhancement of the management tools offered by Lactanet. 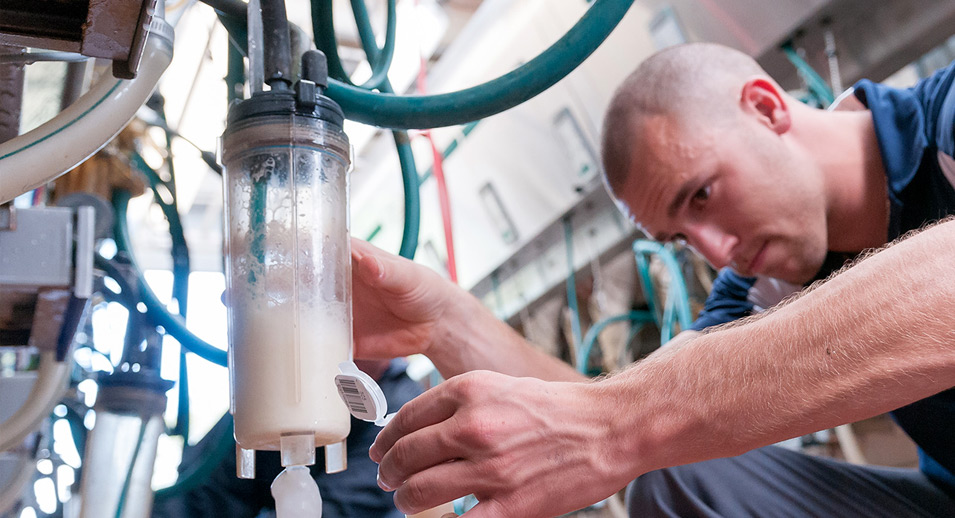 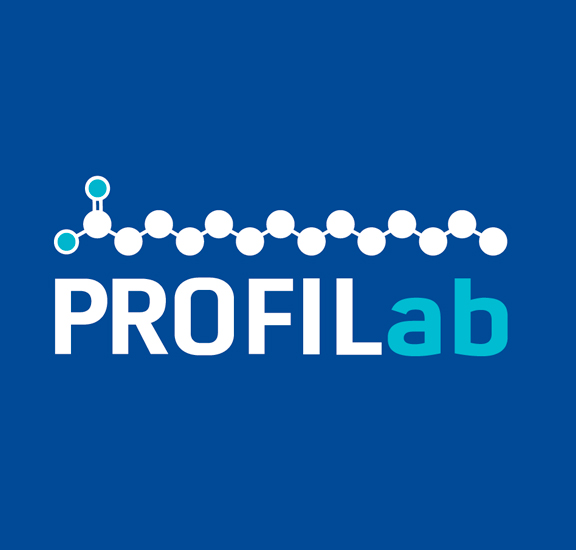 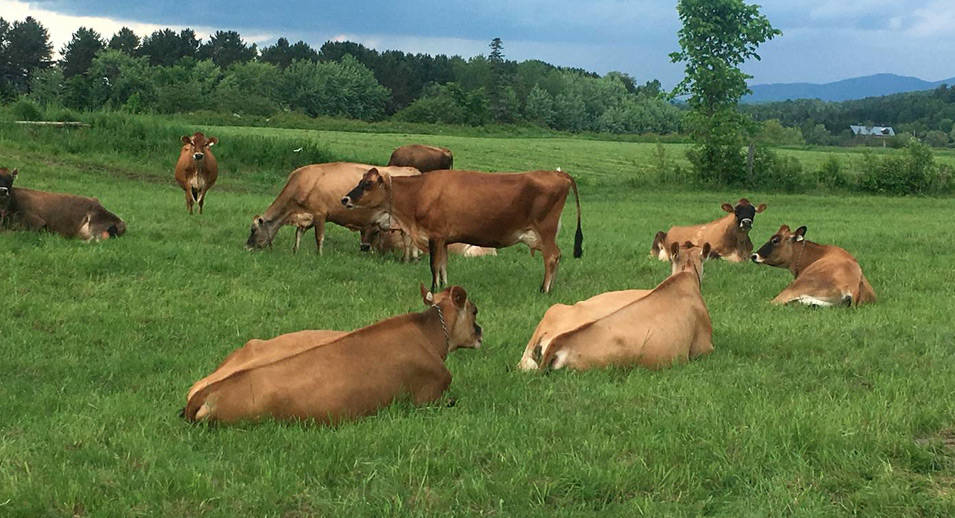 PROFILab is Useful In The Pasture!