One benefit from genotyping females that has a growing interest to dairy producers is the information that becomes available relative to genetic recessives and haplotypes.  CDN last wrote on the topic in June 2016 (see “Managing Recessives & Haplotypes” article on CDN web site) so it’s time for a quick refresher and a current status update.

What is a Haplotype Compared to a Recessive Trait?

Each dairy breed has known genetic traits referred to as “recessives”.  Examples in the Holstein breed include Brachyspina, CVM, BLAD, etc. as well as the traditional gene for red coat colour.  These recessive traits are defined by the official breed association, such as Holstein Canada, and therefore have specific codes assigned to label animals that are known to be free or known to be a carrier.  For these genetic traits, the test results are known with a very high degree of certainty, essentially 100%, since the test is based on a known gene that controls the specific characteristic.

Haplotypes are short strands of DNA that make up an animal’s genotype.  By analysis of genotypes for a large number of animals in a given breed, scientists are able to identify haplotypes that appear to cause an undesirable genetic anomaly. Once identified, an analysis of data is conducted to validate the causal relationship and to quantify its importance. In North America, the Council for Dairy Cattle Breeding (CDCB) in United States has established routine procedures to identify such undesirable haplotypes and a standardized nomenclature for labelling them. In the Holstein breed, recent research results identified a new haplotype affecting fertility, which is labelled as HH6, meaning “Holstein Haplotype #6“. As a consequence, CDN now publishes the Carrier Probability result for each animal on their Pedigree page displayed on the CDN web site. The Advanced Query tool also allows users to filter sires known to be carriers or free.  This information is added to results for the other five Holstein haplotypes (i.e.: 1 to 5), as well as the known haplotypes affecting fertility in the Ayrshire, Jersey and Brown Swiss breeds.

On a routine basis, CDN publishes trends by year of birth associated with the frequency of the various genetic recessive traits and haplotypes in Canadian-born animals. Figure 1 shows the frequency trend for the various recessives recognized by Holstein Canada.  This graph nicely demonstrates how the frequency of BLAD, CVM and more recently Brachyspina have been managed once they were discovered and bull purchasing strategies were modified by A.I. organizations.

Figure 2 presents similar trends by birth year for the various haplotypes known in the Holstein breed. As with the genetic recessives, most of the frequency trends have been steadily decreasing since genomics was introduced ten years ago.  The main exception is the increasing trend for HH5, which reached an estimated frequency of 6% for Canadian Holsteins born in 2018. That said, the percentage of animals born in 2018 that are carriers of HCD is estimated at roughly 7%. 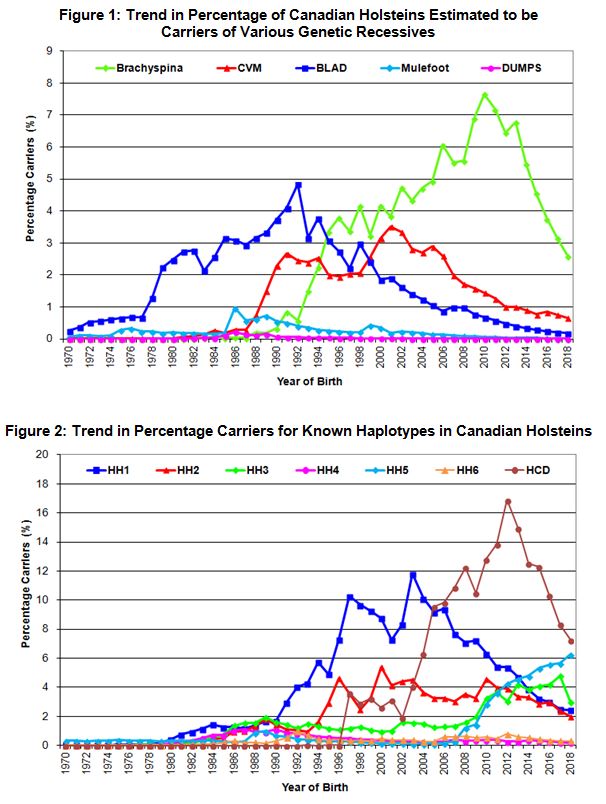 While the trends on an overall breed basis show promise to reduce the negative impact of the recessive traits and haplotypes over time, CDN conducted an analysis to look at frequencies of these characteristics within each herd based on their DHI herd inventory. Therefore, instead of looking at trends by birth year, a closer examination could be made at the active female population of Holsteins in Canada as well as the variation of carrier frequencies across herds. 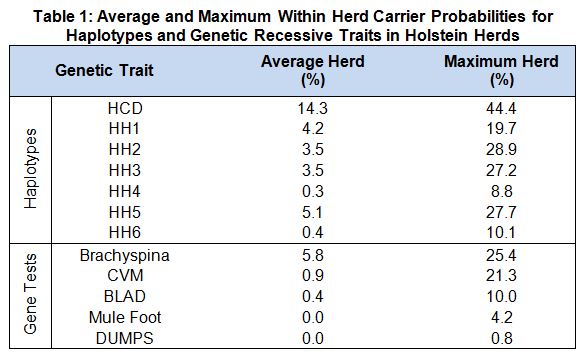 As a breed, it is clearly HCD that requires the most attention by breeders. Not only does it have the highest average frequency within herd of 14.3%, there is a very wide variation across herds with the maximum herd frequency surpassing 40% of the heifers and cows. Figure 3 shows the distribution of herds based on the average HCD Carrier Probability. On an overall basis, while 20% of all Holstein herds have a frequency of 9% or less, there is also another 20% of herds for which 19% or more of their animals are expected to be HCD carriers.  For these herds, genomic testing has an added value since this is the only way to separate carriers from those that are 99% likely to not have the gene associated with Cholesterol Deficiency. 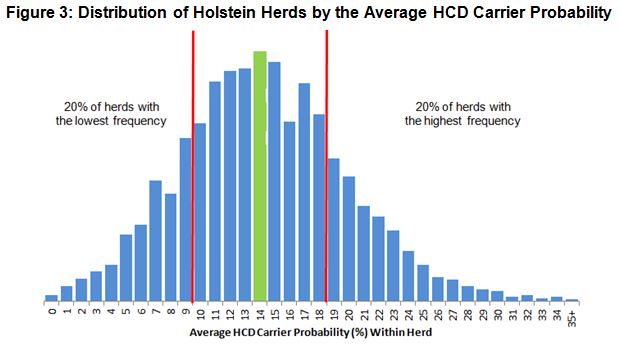 For all of the genetic recessive traits and haplotypes mentioned here, the best way to avoid the associated problems is to not mate a carrier sire to a carrier dam.  To do this best, one needs to know which animals are possible carriers and then genomic testing would separate those that are versus those that are free. It is not recommended to totally exclude carrier bulls from your sire selection decisions but knowing that they are a carrier will help to ensure they are not mated to females that are known or possible carriers. Later this year, CDN and Holstein Canada will be launching its new genetic management software, Compass, which will help Holstein breeders do a better job monitoring and controlling the impact of these negative characteristics in their herds.

< Previous postPro$ & LPI: Enhancements and Updates
Next post >Is your ventilation system up to the challenge of keeping your cows cool?