10 Years of Genomic Selection: What’s Next?

It was ten years ago, in August 2009, that genomic evaluations were first officially published in Canada.  This started with the Holstein breed but the same technology was later also applied in the Jersey, Ayrshire, Brown Swiss and Guernsey breeds. Let’s take a quick look at how genomics has changed dairy cattle selection, its impact on genetic improvement and contemplate what’s next on the horizon.

Almost immediately when genomics was introduced, the A.I. companies around the world were seemingly forced to embrace it.  Given the intense competition between organizations, as soon as any had decided to aggressively use genomic selection, they needed to as well to stay in business. The science showed that genomics was not a “fade” and technology had advanced to a point where DNA could finally be used for genetic selection in dairy cattle.  The biggest advantage that genomics provided to A.I. companies, was the increased accuracy of genetic information available prior to making any bull purchasing decisions. Also, genomics allowed for the use of younger sires and dams as the parents of the next generation of young bulls, without much sacrifice in accuracy.  Together, this translated to an unprecedented annual rate of increase in the average genetic merit of young bulls entering A.I. throughout North America, which now exceeds 120 LPI points and $200 Pro$ per year.  With such a continuous year over year boost in the genetic makeup of genomic young sires offered through A.I. companies, these bulls now represent two-thirds of the total semen market share in Canada.

A direct and very significant outcome of having genomic evaluations for the past ten years is the impact on the increased rate of genetic progress.  Figure 1 shows this impact very clearly since the steady rate of annual gain before genomics, which was 46 LPI points and $79 Pro$ per year, suddenly switched after 2009.  During the past five years, the average rate of genetic gain has increased by 2.2 fold, reaching 102 LPI points and $180 Pro$ annually. The dashed lines since 2009 in Figure 1 reflect the expected genetic progress that would have been achieved for both LPI and Pro$ in Canadian Holsteins if genomics had not been introduced.

Of equal, or perhaps even greater, importance than these realized gains for LPI and Pro$ is the impact that genomics has had on genetic progress achieved for individual traits as shown in Figure 2. The first key point to notice is that positive genetic gain is now being realized for all of the major production, conformation and functional traits in addition to Pro$,  LPI and its three components. Before genomics, in addition to losing ground for Daughter Fertility, Persistency, Milking Temperament and the Health & Fertility component of LPI, very little genetic progress was being made for other traits including Fat and Protein Deviations, Milking Speed, Daughter Calving Ability and Metabolic Disease Resistance. For all of the other eleven traits in Figure 2, the average rate of genetic gain realized with genomics has increased two-fold. The truly amazing outcome now known is that genomics provides an unprecedented opportunity to realize selection objectives for lower heritability traits even if they have negative genetic correlations with traits of moderate or higher heritability. 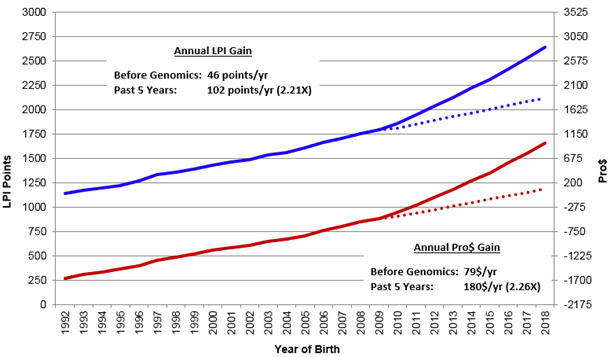 Figure 2: Genetic Gain Achieved in Canadian Holstein During the Past 5 Years Compared to 5 Years Before the Introduction of Genomics 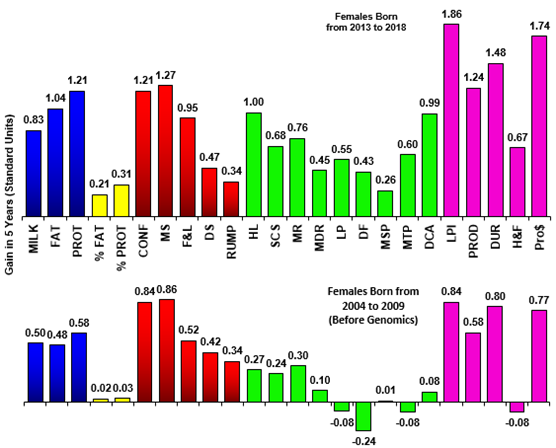 Over the past ten years, over 3.2 million genotypes have now been accumulated in the genetic evaluation database at Lactanet.  This includes genotypes from animals all over the world, mainly the United States, since it was agreed at the onset that both countries would share all dairy cattle genotypes.  Figure 3 shows the evolution in the number of genotyped Canadian-born Holstein females since 2008. After an initial gradual growth period a level of plateau was seemingly reached during the years from 2015 to 2017. For various reasons, one of which was a 27% reduction in the cost of heifer genotyping in Canada, the adoption of female genotyping in Holsteins jumped to over 37,000 in 2018 and activity so far this year leads to a projected volume of 53,000 females for 2019. Figure 4 shows the similar information with genotyping adoption rates expressed in terms of the percentage of females registered by Holstein Canada by year of birth. This figure shows that the market penetration for heifer genotyping reached the 12% mark for registered Holsteins born in 2018. 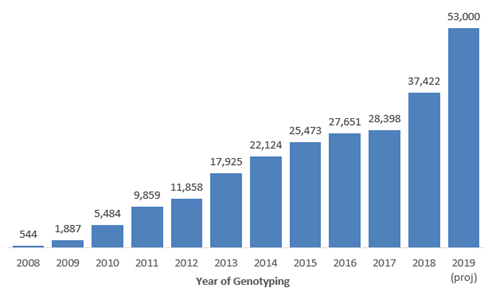 Figure 4: Adoption of Heifer Genotyping by Year of Birth for Registered Holsteins in Canada 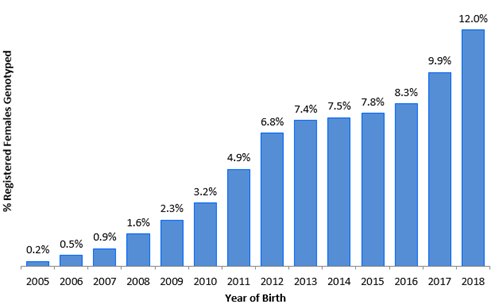 The implementation of genomic evaluations and the use of genomic selection have only just started to impact dairy cattle improvement strategies in Canada and globally. Given the experience with genomic selection over the past ten years, looking into a crystal ball towards the future, one can expect to see the following over the next ten years:

Needless to say, we are still at the tip of the iceberg when it comes to the impact that genomics and DNA genotypes will ultimately have on the dairy cattle industry.

< Previous postSubclinical ketosis: Are your cows hiding something?
Next post >Dairy cattle out in the pastures at McGill University!